What is a fully illustrated storyboard?

The fully illustrated storyboard is derived from your sample artwork, and is the final stage before going into full production.

You will now see an image against every sentence of your script.

As with the sample artwork, this is a collaborative process and there is still the opportunity for you to comment. We recommend you do! This sometimes becomes a thread of comments when it’s seen by different members of your Team.

You need to look at every screen, and to be sure it’s showing the right thing to match your script.

If you have a one minute video with 130 word script, you’re likely to see 8-10 screens, which in the final video would each last 5-6 seconds.

Please bear in mind that you're still only looking at a snapshot of any screen.

At the editing stage, this will become a moving sequence.

From now on, it’s us that do all the work. Your job is done, thank you!

What does a fully illustrated storyboard contain? 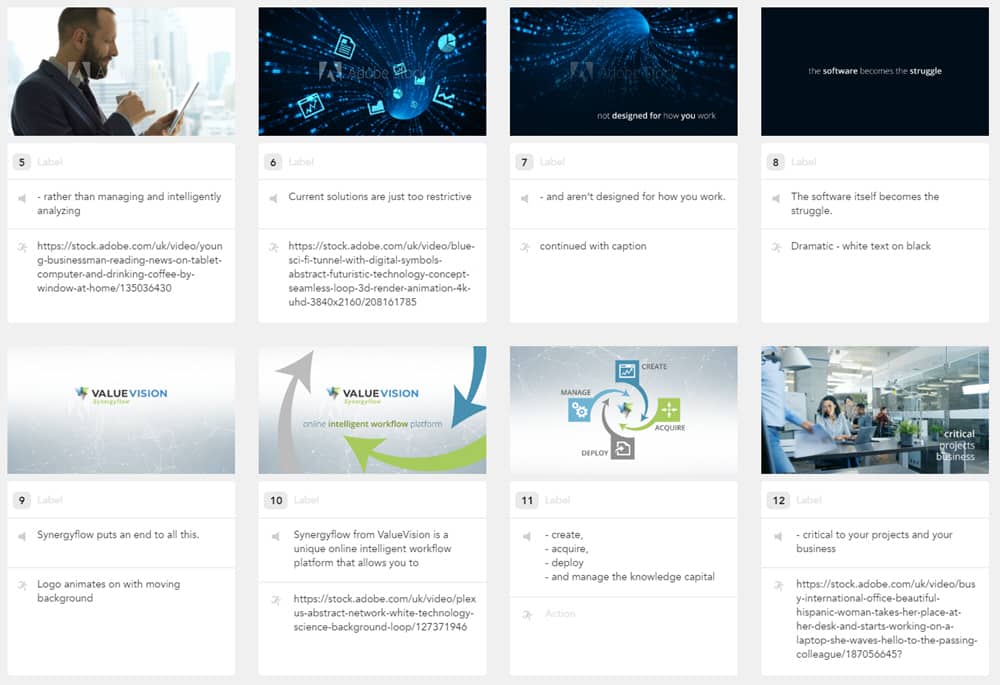 You can now see exactly how the words and images will match.

You can also see how your branding appears throughout the video.

In addition, for example in an explainer video, you’ll see a description of what the editor intends to do to bring each screen to life as a scene.

Or for a stock footage video, you see a link to preview the suggested clip.

How do I view my fully illustrated storyboard?

We’ll send you a link.

You can share this with your Team so they can view it from anywhere in the world.

Sharing and commenting quickly will enable you and us to keep to schedule.

TRY THIS: Here’s an online example

Click on any thumbnail image to see it full screen.

Then use the arrow keys at the top right to move through the screens.

You can then write comments directly on the screen. 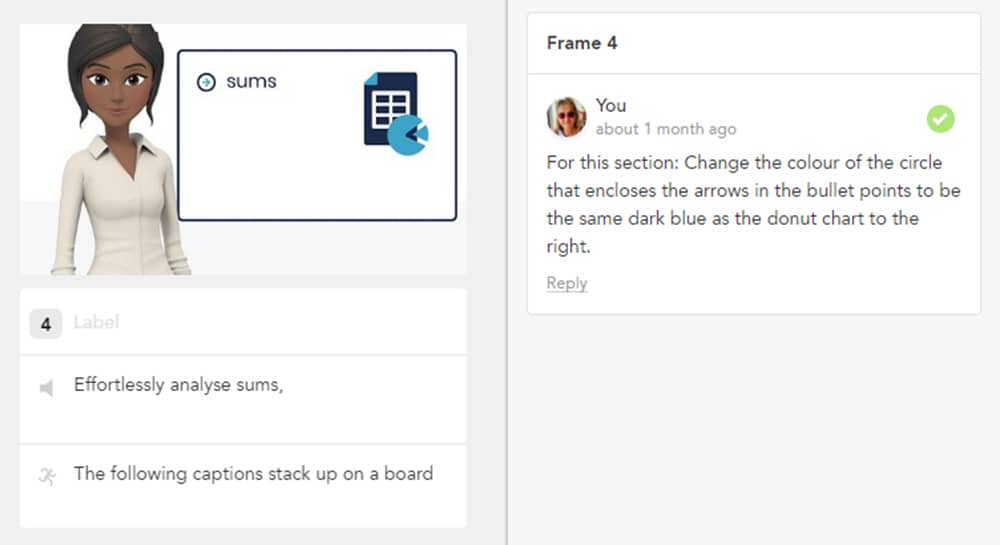 Comments on an illustrated storyboard

The designer will receive these comments immediately, and can act on and resolve them.

For this we use Boords online storyboard software.

Please note: if you’re not comfortable using Boords for the first time, the designer will walk you through how to make comments.

What’s important is that everyone has seen it and has had their say.

Once we move forward to editing, we don't expect major changes, because there’s been a consensus about every step.

These discussions are essential at this stage before going into full production. You have to be completely happy and in agreement with what you see. You’re the expert!

The next stage of production is recording the voiceover. You may have already selected the artist to read your script, but we don’t record them until the full visual storyboard is approved.

What if I want to make minor changes?

After approvals, we don’t expect big changes at this stage.

This is a “Right First Time” process.

The overall video structure has been approved. We don’t need to suddenly reinvent the wheel.

So you shouldn’t need to do anything more than make adjustments to the existing material.

But for instance, someone might say “At frame 24, this needs to be a pie chart, not a line chart”

Or “this photograph needs to be replaced”

Or make a small change to a caption.

How do I approve the visual storyboard?

This is the fourth of the 5 key approvals:
Reminder: the previous three were script, outline storyboard and sample artwork.

Once all the comments have been made by members of your Team and have been resolved, you formally approve by emailing the Studio.

Once you approve the fully illustrated storyboard we can start editing your video, and record your script.