1st viewing - How to review my finished video

How do I review my video?

When we’ve finished editing the video, we’ll email you a link to watch it online.

Although it’s the first draft of the video, often it’s pretty much perfect.

You’ve already seen and approved the script, the draft storyboard, the sample artwork, the fully illustrated storyboard and the voiceover - so there are no great surprises.

Usually there are small adjustments to make, eg, things the video editor couldn’t know about.

It’s the first impression that counts with your audience, and so it should be with you, so note how you feel after your very first look, and remember it.

Make sure you’re sitting comfortably first, and not going to be interrupted.

You never get a second chance at a first impression.

Once you’ve formed your first impression, obviously you’ll show the video to colleagues.

Why do you use an online review system?

With Vimeo or a similar review tool, you and your colleagues can make helpful comments directly on the video timeline.

Say an icon needs replacing at the 25 second mark. You can make the comment on the timeline exactly at the 25s mark - on the icon - and the editor immediately knows, and can fix it, and mark it as resolved. 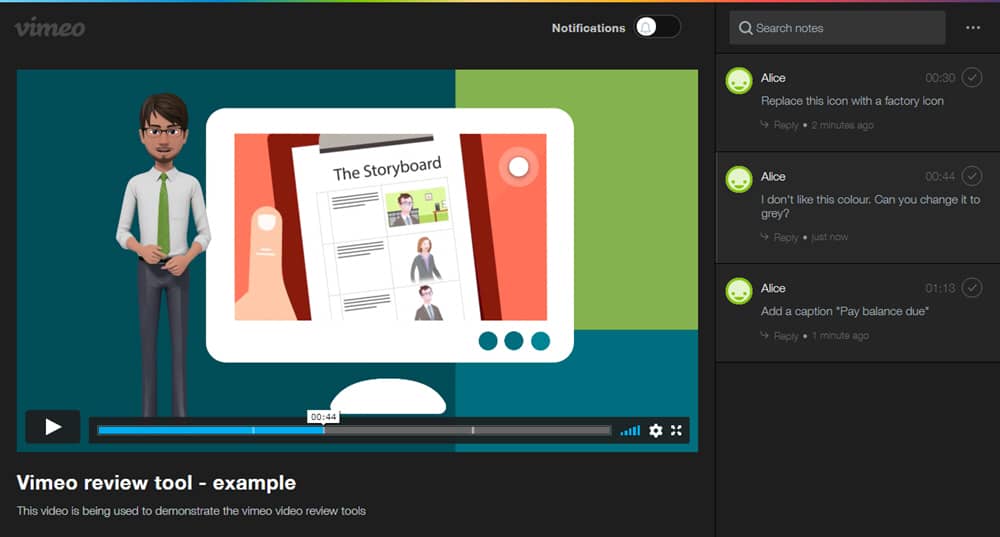 The same applies to filmed video

For example, if there’s an unsightly rubbish bin in the background of a filmed shot at 1 minute 34 seconds, you can type on the screen - on the bin -  at 1m 34s and point this out, and ask for a substitute shot to be found, or request the unsightly bin is digitally removed.

The editor is immediately notified, can update, and mark the problem as “Resolved”

This system is much better than sending out copies of mp4 video for all your video team and approval layers to review and make comments on.

How do I use the Vimeo video review tool?

Click on the link we’ve sent you by email.

This will open the vimeo video review screen.

Press the play button to watch the video through for the first time. 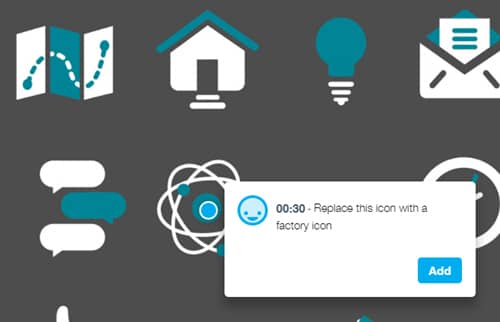 The editor can then see all your comments together, and action them promptly. 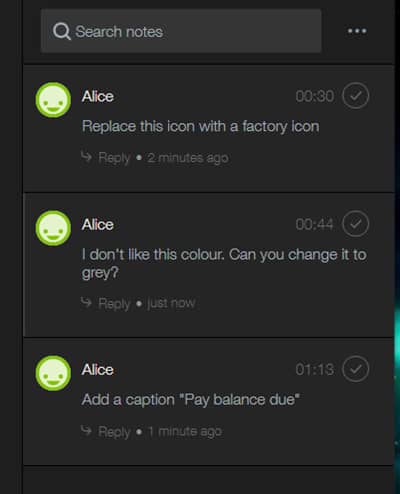 When you know that all your colleagues have seen and commented on the video - and that all the amends have been identified, then let the Studio know.

Although we’ve seen every separate comment, we need to know when you’ve finished.

We'll then attend to them promptly, in one session.

Can I make changes to the final video?

You’ve approved each stage of the video, from script to visual ideas, to sample artwork and the fully illustrated storyboard.

And you’ve heard the voiceover.

So we’re not expecting any big changes at this stage.

However we’ve allowed some time to make small changes.

What changes can I make?

At the start of your project, you accepted and agreed to a fixed cost for the total project.

Within this cost, we allow time if necessary to make small amends, for instance to

Depending on the video package you bought, you may also be able to change a sentence - and get the voiceover to re-record it - all within the original quoted cost.

However, there may be a charge if it’s outside the specification of the package you bought.

Please ask your Editor or Producer if it’s important that you change the script at this stage.